OK... So I have to confess, sometimes I confuse very easily. Apparently, 15 years ago today was a Sunday rather than a Saturday, but then again I only have Dandy's word for that as I wasn't around...

Sundays are a bit strange around here. For one thing, the 2-foots get up late, and for another, often they do not even leave the house. Yesterday was a Sunday that started off really badly, but got a LOT better.....
The first 2-foot to put in an appearance, was the one with no fur on the top of his head. He thought it would be a good thing to do to carry me upstairs, and plonk me unceremoniously on to this kind of high plinth thing that the 2-foots sleep on. Apparently, my job was to bounce around on top of the other 2-foot who was still asleep. Well I did that for a while just to make them happy (you know how obliging I am, it's one of my best qualities), but of course I could not be expected to stay up there for too long, I mean I had my own stuff to get on with, but there was NO WAY that I was going to jump down all that way on my own. So anyway, one of the 2-foots lifted me down on to the floor, but guess what? the idiots actually expected me to go downstairs on my own! I stopped at the top and looked down, and to say that it was a long way in no sense conveys what a terrifying idea it would be to even attempt a descent. To make things worse, one of the 2-foots laid down on the stairs, and tried to "encourage" me to go down. I was not having any of it I can tell you! I jumped straight into his arms and made him carry me down.
It get's worse..... When I told Flopsy Girl about it, she called me a wimp, because she has no problem with the stairs, she runs down them after she has had her botty baths! Just as I thought that the whole day was going to be bad though, a wonderful thing happened! You may remember, some time back, the 2-foots bought us a treat ball. They put treats inside it, and we are supposed to roll it around and get the treats out. Anyway, I have never been able to do it. until yesterday, when I FINALLY got the hang of it! I pushed it around with my nose, AND THE TREATS CAME OUT YEAHHHH!
Current Mood: accomplished 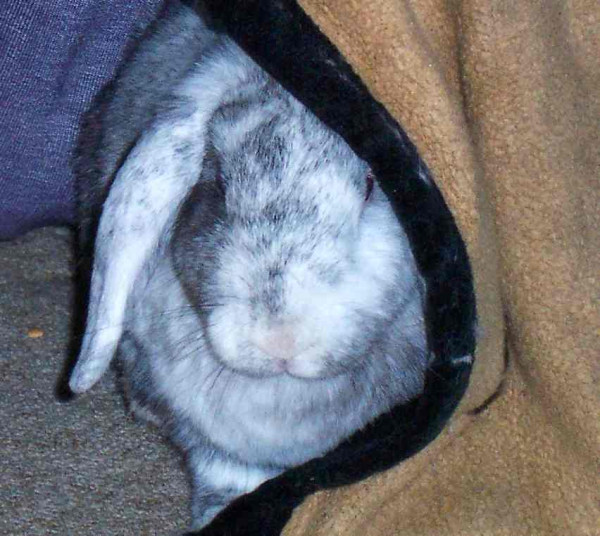 PS - I wouldn't have tackled the stairs either, for a start I can't see them plus if your 2-foot took you upstairs, then why not bring you back down?