15 years ago today, Dandy was continuing to push the boundaries...

Sometimes (especially at weekends) The 2-foots let us play out at night, but when they do, one of them ALWAYS sleeps downstairs with us (just in case we decide to eat the furniture). Last night though, they let us stay out, but they BOTH went upstairs to bed!

We were very very good, so hopefully they'll do it again, and then we CAN eat all of the furniture......
Current Mood: cranky 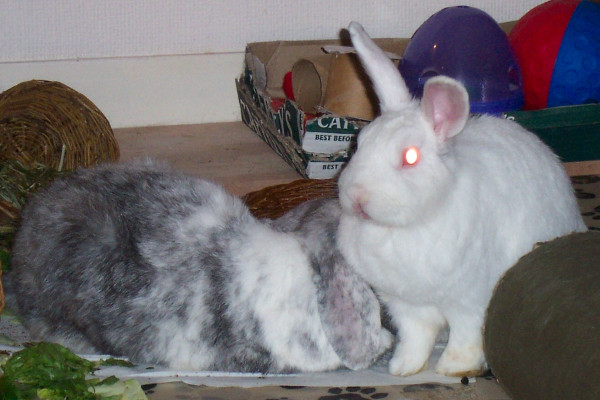 Oct. 26th, 2003 02:52 pm (local)
Another step
Well done Dandy and Flopsy Girl :-) That will show the 2foots that you are capable of not ruining things and that you can stay out all night on occasions and not have to have a 2foot with you. Mind you, it would be nice now and again to have a 2foot there so that you could torment him/her :-) It's fun to wake them up in the middle of the night by bouncing on them or making noises with your toys :-)
Now as for eating the furniture! That would be a NO NO!!!! Imagine doing that and then not being able to come out of a night again? It would be awful :-( If you are going to do that you have to do it right - chew in places that they won't find - at least for a long time anyway (giggle) - don't leave any evidence of wrecking furniture as it will only give the game away and back into your condo you will go of a night! Hide all evidence including all e-mails that you have written and that have been sent to you ;-) This way the 2foots think that any mails that they read about you are all good ones and they will be very proud :-)
I've had to do this on a couple of occasions - but I have hidden the evidence - if mum goes to look properly behind the sofa then I will be rumbled - mind you, I'll blame it on Jemima :-) Crafty eh? Don't you go blaming it on Flopsy Girl though as you will both still end up in the condo AND get nagged at by Flopsy Girl for days on end!
Well, must go, am watching the fishing weekend on the tele with dad - it's a man's thing and even though I am not that interested it's better than football :-)
Regards to Flopsy Girl - Violet says she will send her a mail soon.
Mr Jingles and the rest of the hairy mob