15 Years ago today, Dandy was puzzled...

I must say, I find this all very confusing, because I have seen this clock thing, and the only thing I have ever heard it say is bong, bong, bong, which makes no sense to me at all.

This morning though, things are not quite right. The 2-foots did not get out of bed until it was starting to get light, this is significantly later than they normally would on a Monday morning. I asked Flopsy Girl about this, and she said it was because the clocks had changed at the weekend, but this is clearly nonsense. I have looked at the clock, I have smelled the clock, I have even licked the clock, and I can assure you that it is exactly the same clock as before. What REALLY concerns me, is that there is some kind of conspiracy, and that this clock is telling the 2-foots to do the wrong things at the wrong time. This is obviously going to have a serious effect on when AND IF! they feed us. Our morning treat stick was late this morning, so I can only assume that this does not bode well for our big basket of greens tonight. Supposing the clock tells the 2-foots not to feed us at all today... or tomorrow..... or EVER?
Current Mood: worried 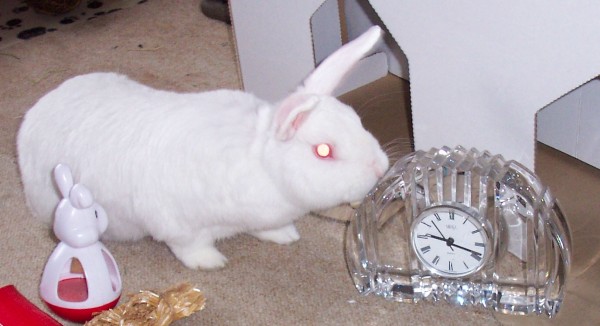 Comments
( 1 comment — Leave a comment )
(Anonymous)
Oct. 27th, 2003 09:42 am (local)
Now what's going on?
Ahhhh, you have me there now Dandy Boy! I noticed that our foods and bedtimes have gone to a different time and to tell the truth I was fair miffed with it all - the living room is mine! all mine - and mum and dad stayed up last night watching tv while I was waiting for them to go to bed and turn off the lights - I mean to say, it's no fun sleeping with the lights on, I don't mind early evening when I am dozing but not when I want my proper bedtime sleeps!
I had heard mum mention something to dad about the clocks going back - I thought that it was strange as they are all still here and when mum spoke about it it was already very dark and late - no shops would be open at that time would they? How can you take so many clocks back to different shops at that time of night? Silly mum :-)
I will have to ask Violet about all this - yes I know that she is younger than me but, she is a woman and they always have an answer for everything!
I don't think that the clocks would tell your 2foots not to feed you - that would be cruel - check on your food tonight and if you get a big salad bowl then you will be alright :-) If not, then you have to do something to the clock - it may be a case of you and Flopsy Girl versus the clock - two against one should win easily I think :-)
Will go and have a chat with Violet now and see what she can come up with - that's if she is awake! She has been snoozing for a couple of hours now - must need her beauty sleep (giggle, giggle).

Regards to Flopsy Girl, if you find anything more about the clocks then let us know.

Mr Jingles and the rest of the mob