15 years ago today, and Dandy had plenty to say for himself about his spell in Hop-Sit-All


What a relief
Nov. 7th, 2003 at 7:50 AM
Arwen and Fizz
Well..... where do I start? If you remember, I was pretty suspicious at the beginning of the week that something was going on with the 2-foots, and to be honest, I was also feeling pretty bad tempered (yes I know that's hard to believe, as my manners are always perfect, but nevertheless, it's true). By Monday night, I began to realise that I had stopped pooing, and that I was blowing up like a balloon, and of course that was the very time the 2-foots were not around (typical).
When my 2-foots came home, they fed us, and the one with no fur on top of his head picked me up, and massaged my abdomen (not that it helped), anyway, he stayed up with me all night, and in the morning, he took me with him in the big grey metal thing with the wheels on. Ah, I thought, he's taking me to see Auntie Francis (the best bunny vet in the world), but we did not go to see auntie Francis, instead he took us somewhere else, and then he just left me! I admit, he kept coming back to check that I was alright, but I ask you, is that any way to treat a sick bun? especially when it's me!

Eventually, he came back, and we set off again. We went to the place where I usually see Auntie Francis, but she was not there, so my 2-foot introduced me to one of Auntie Francis's friends. She had a good look at me, and I thought ok, that will be alright now, and I'll be able to go home to Flopsy Girl, but NO, I was taken to a room where there were lots of other buns, and left for a while. Eventually, Auntie Francis came, and she took my picture. Now as you know, I ALWAYS look great on pictures, but these pictures did not look like me at all, they were all grey, and looked like a bag of bones, anyway, Auntie Francis studied these pictures at great length, and told me that I had a big ball of gas in my tummy, and then she gave me some medicine. There were two lots, one was supposed to make me poo (it didn't), and the other one was to make me feel better (which it did). Right I thought, can I go home now? but no, I was put back in the place where all the other buns were and I was given something to eat. Later, Auntie Francis came back and took my picture again, gave me some more medicine, and ate a little bit, which seemed to please everyone, but STILL they would not let me go home.

As it got later, and things got quieter, I started thinking about Flopsy Girl, and how much I missed her. I wondered if she was missing me, or if she was pleased that I was not there as she would have all the food to herself, and she would be getting lots of attention from the 2-foots. Eventually, I fell asleep, and dreamed of Flopsy Girl, and carrots.

The next morning, Auntie Francis came to see me again, and gave me some more medicine. I tried really hard, and managed to do a little bit of poo, which seemed to please her, but STILL they did not let me go home.

When night time came, I started wondering why my 2-foot hadn't been to get me, I mean don't get me wrong, Auntie Francis is really nice, but I wanted to go home. I was worried that Flopsy Girl would be getting used to me not being there, and maybe she would not want me back, I fell asleep, but I had dreams of being chased by a giant cabbage!

When I woke up the next morning, Auntie Francis was there, and she seemed really pleased with me. "If you go on like this Dandy, you can go home tonight" she said.

The day really seemed to drag, but eventually, MY 2-FOOT CAME!!!! He had a long chat with Auntie Francis, and then he took me in to the big grey metal thing, and we had a great big long cuddle before we collected the other 2-foot, and went home.

I was SO excited when I saw my Flopsy Girl, that I chased her all over the place. She stamped at me to calm me down, but it made no difference, and soon she was running about and playing just as much as I was.

Last night was one of the best nights of my life. I love my Flopsy Girl sos very very much, I NEVER want to be apart from her again.
Current Mood: bouncy 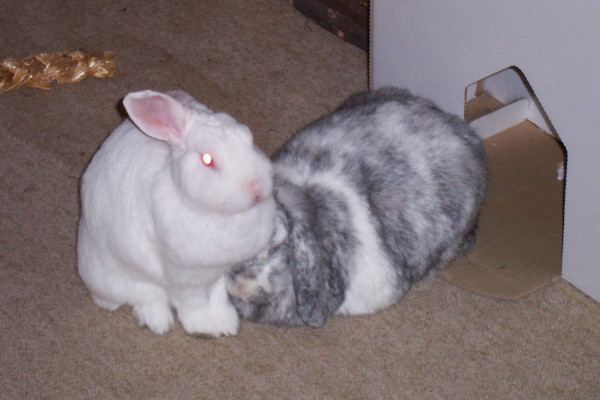 We were all getting worried about you and Flopsy Girl, she did seem very very down, Loppy tried to cheer her up. I bet you had loads and loads of snuggles for and from Flopsy Girl. I really like snuggles, they make me feel so warm.

We are really really pleased you are home.