15 years ago today, Dandy was confused...

The food situation is still dire, there are still no beans, and the parsley is the curly stuff, not the flat leaf kind which is much nicer. On a brighter note though, the snow has almost all melted, so I HOPE that the food supplies will start to come through from the Sainsbury's allotment. I can only guess that the food supplies are so scarce because my 2-foot (the one with no fur on the top of his head) is having trouble finding all of the best stuff underneath the snow.

On another subject, I was reading the Hairy Mob's Journal at http://www.livejournal.com/~thehairymob/
Violet was saying that she has found out what an Indian is (if you have been reading recent entries, you will know that we have been discussing 2-foot food). Well, anyway, Violet says that she has found out that an Indian is a person who lives in another country, and that he wears a turban on his head. We have thought about this, and Flopsy Girl is not sure that Violet is right. For one thing, If the 2-foots had to go to another country to get their food, it would not be still warm when they got it home, and for another thing, Flopsy Girl is sure that she has seen an Indian on the light up box that the 2-foots have in the corner, and Flopsy says that the Indian she saw had feathers on top of his head, and he was sitting on top of a really big animal that was running very fast, and that this Indian had bits of wood in his hand that he was throwing at some other 2-foots called Cowboys.

All this has left us both very confused. It would seem that just when you think that you are beginning to understand what is going on with the 2-foots, something happens to make you even more confused than you were in the first place!
Current Mood: confused 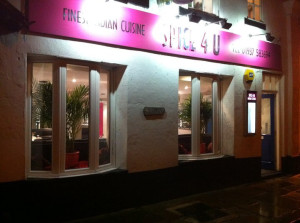 Jan. 30th, 2004 12:59 pm (local)
INDIAN
Now we are completely puzzled about an Indian. So is it a person that wears a turban, a person that throws sticks at something called a Cowboy or smelly food?


thehairymob
Jan. 30th, 2004 04:12 pm (local)
Indians
Ah yes, well in a way you are all right - now there are different types of Indian and I should have made myself clearer - silly me, I keep forgetting that I am so wise and that others need things explaining a bit more - just like the rest of the hairy mob actually!

The Indian that wears a turban does indeed come from another country called India - this country is a long long way away - so some of these Indian 2foots have moved over to this country and set up shops, market stalls and eating houses for the 2foots who live in this country already. That explains why the food is hot when 2foots bring it home as they can go and collect it from eating places - sometimes 2foots can go to Indian restaurants and have the food in there - this is called going out for a meal.

The other Indian with feathers who sits on a large animal (this is called a gee-gee or a gee-up) - now they are Red Indians - I know this is confusing 'cos they don't look red - it had me puzzled for a long time! These Indians live in a place called America and where the original 2foots who lived and owned that place - then the white 2foots went to America and chased them away! Now the Indians only have small parts of America and they live in things called tribes and they like to live in tents that are called Teepees - very strange but they are very nice people.

So, the food that 2foots go and get to bring home or eat out that is called Indian - is actually made by the 2foots who used to live in India but now live over here - I don't think I have ever seen a Red Indian eating house! There might well be and I would love to know about it as I could put that into my vast knowledge as well - not that I like to brag about these things but well ....... :-)

thehairymob
Jan. 31st, 2004 12:07 am (local)
Beans
Hi Dandy and Flopsy Girl
Our dad went to the Sainsburys Allotment and he saw fine beans there - he also saw lots of other nice veggies and he popped lots into his trolley :-) We have nice greens, celery, watercress, rocket, spinach, pak choi and apples (slurp) - dad saw flat parsley there too - we think your 2foot without the fur is not trying hard enough! He could try Tescos allotment or even Safeway or Morrisons - do they have some of those allotments near to where you live?
We hope that you get your fine beans soon - you are going to have to sit your 2foots down (and remember to switch the television off!) and have a good talk to them. Violet says not to shout at them but talk calmly to them at first, this is a good way of helping with training. You have to do this a few times and then you can raise your voice a little after that. You could try taking away some of their toys and things - don't let them watch TV or listen to music, if they lay down on the sofa you can jump on them and wake them up. Don't forget the pooing in the shoes but make them sticky smelly ones - if all this fails Violet will mash them as this worked with our 2foots :-)
Love from The Hairy Mob

The good news is, there were beans last night, and purple sprouting broccoli, and celery, and parsley, and salad, so it looks as though we may be ok again!