15 years ago today, Dandy was philosophising about Winter...

Will summer ever come?
Jan. 31st, 2004 at 10:14 AM
Arwen and Fizz
We have been doing some checking up.... well.. that's not quite true. The 2-foots were watching the light up box, and there was a thing on about the weather. Apparently, the weather changes slowly throughout the year, and we are currently in "Winter". This is why it's cold, wet, and snowy. After Winter, comes Spring, and THAT'S when we start to get out in the garden. Spring is nice because it's not too hot. Summer comes next, and then that's when you need to keep in the shade, and finally, Autumn when it starts to cool down again.
It seems to me that Winter is a waste of time, and I don't know why the 2-foots invented it. If anybun knows just who it is that is responsible for winter, then I suggest we all go and bite them until they do away with it. Then we can have long sunny days and play outside as much as we want!
Current Mood: bitchy 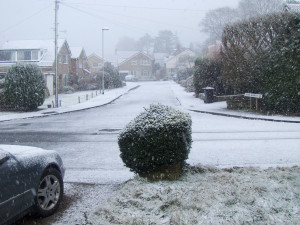 thehairymob
Jan. 31st, 2004 03:44 pm (local)
Winter
Well our 2foots blame the government for everything so it must be them that are responsible for Winter - we don't like winter and if it is the government that are responsible for it then we would like to team up and bite them as well - Violet will do her bestest mashings ever!
We think that the government is someone called Tony Blair but there again mum says that it is probably George Bush who is behind it all - he usually is!
Love from The Hairy Mob

dandybun
Jan. 31st, 2004 05:36 pm (local)
A bush called George
Now let me get this straight.... There's a 2-foot that does a job called "The Government", and his job is to take the blame for everything, but it's really the fault of a bush called George... We have several bushes in our garden, but I don't think they have names, and to be honest, they don't seem to do anything, so I think that you may have got that one wrong. Maybe it's the fault of the Indian? he seems to have everybun confused by where he lives and what he looks like, so I CERTAINLY don't trust him!

thehairymob
Feb. 1st, 2004 01:15 am (local)
Re: A bush called George
Ah, we see what you are getting at but we don't know about a bush being called George, there might be lots of them for all we know! Anyway, there are lots of 2 and 4foots called after plants, bushes and trees. For instance, there is Violet and then we have Rosebud, there is Maple, we did have Fern, we fostered a Poppy and so on ..... If you look at the lists you will see that lots of 2 and 4foots are named after plants and stuff.
Our Scoot resides a lot in a tris on the coffee table in the living room - now he is an avid television watcher and due to this is now somewhat of an expert on current affairs and polyticks - he says that there is a man government that is called Tony Blair but that lots of people say that he is only really a puppet and that another man (who doesn't even live in this country but lives miles and miles away in America - where they chased the Indians away from) well, they say that he is the 2foot who makes the puppet called Tony Blair move and talk. Now we know that television and news don't always get things right but Scoot says that you can see this Tony Blair often with the George Bush and sometimes Tony says something and his lips don't move!
And another thing - why haven't your bushes got names? Some of ours have and we know that Prince Charles talks to his plants so they must do something mustn't they? They might advise him on what to say at meetings and what to say to the Queen - if Prince Charles talks to his plants then they must talk back to him or why have a conversation with them in the first place?
This is all getting very confusing :-)
Love from The Hairy Mob