15 years ago today, Flopsy Girl was teaching Dandy how to misbehave...

When my Flopsy Girl sets her mind to something, then whoever, or whatever tries to stand in her way had better watch out! She has now decided that it's only fun to pee on the floor, while the 2-foots are actually there. "What's the point in doing it when they are not around" she said "Where's the challenge in that?". So last night, my best girl took the 2-foots on big time. She hid in the top of the cardboard house for a while, and then came out and had a bit of food..... lifted her tail up, but the 2-foots were too quick for her, but before they could catch her, she sprung back into the top of the cardboard house! This happened four or five times, until EVENTUALLY, she managed to do it!

Afterwards, she had a really big smirk on her face. "Dandy" she said "I never get tired of showing them how much smarter we are than them".

You've got to hand it to her... in fact .... the best thing to hand to her would be the litter tray!
Current Mood: cranky 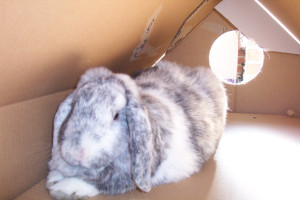