5 years ago today, Dandy was rather pleased with the way that things were turning out...

Well... My pet 2-foots took Barley (The Easter Bunny) down to join the hairy mob yesterday (don't forget their journal on http://www.livejournal.com/~thehairymob/ )
The main reason of their visit though was to go for some training on how to look after us better, and I must say that the first signs are encouraging. We were fed and fussed well last night, and this morning, I was carried upstairs to have a long talk with my 2-foot (the one with no fur on the top of his head) while he was still in bed. He made lots of fuss of me, and to be honest, it was a much improved performance. One thing that puzzles me though, why has the top of his head gone dark pink? We may never know.

I need to say a big thank you to the hairy mob for the BUNDERFUL present you sent up to us. A PACKET OF SUN DRIED MANGO!!! We had some last night, and it's GREAT!!! Flopsy girl says that she thinks there is some pineapple as well, which is even better!
Current Mood: happy 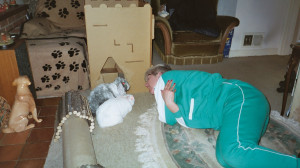 the_furry_gang
Apr. 12th, 2004 11:25 pm (local)
Pink head
Hiya Dandy bun this is Poppy bun here. Biccy wanted me to tell you that he knows why your 2-foot's head has gone all red. (he would tell you himself but he is asleep in his box with Pebs). He says that when a 2-foot is trying to get a mate, some bits of them go red. He says that our 2-foot's face kept going red when she first got her mate ages ago (before I adopted her). Maybe your 2-foot is trying to get a mate? I thought he already had one?

Poppy and the furry gang xxxx

dandybun
Apr. 13th, 2004 09:00 am (local)
Re: Pink head
I don't think he is trying to get another mate, he keeps saying he has enough trouble with the one he already has, so what would he want another one for? Sun Dried Mango is fab! it comes in flat pieces like pineapple, and it tastes yummy!

Not only have the Hairy Mob sent Mango & Pineapple, they have sent some treats and a toy!!! Thank you, thank, you thank you!!!
Current Mood: excited
Comments
( 4 comments — Leave a comment )
(Anonymous)
Apr. 12th, 2004 11:12 am (local)
Payment for absence
If only all 2foots could get the idea here. It's clear that the hairy mob have their 2foots trained to perfection (well, almost - I did hear that the one with no fur makes some worrying threats from time to time . . .) but the point is they realise there is a price to be paid when they leave us alone.

When they bring us treats and presents we can forgive them for going away - and sometimes maybe they were away so long looking for those gifts and presents! When they bring us nothing we have to exact our revenge by biting, peeing or sulking. It's a good job the hairy mob noticed your 2foots are not up to scratch in the gift department, but I hope that was included in the training as well!

Sounds like your 2foots are making good progress, I hope they don't slip back to their old ways though or you will have to send them back for a refresher course!

dandybun
Apr. 12th, 2004 11:16 am (local)
Re: Payment for absence
Wise words indeed Melster. I understand that in a couple of months, the Hairy Mob are having a training day for lots of 2-foots, I think it's 20th June, so if any of you think that your 2-foots would benefit, then send them along.

Apr. 12th, 2004 03:53 pm (local)
Re: Payment for absence
Talking of payment, I hope the Hairy Mob aren't charging too much for this training. You know what a mercenary that Violet can be! Is it 'payment in parsley'?
Melster

The 2-foots have moved all of the furniture, and they've made the carpet all wet! Honestly, I ask you, what do they think they are playing at?
Current Mood: aggravated
Comments

the_furry_gang
Apr. 12th, 2004 11:27 pm (local)
Maybe they peed on the carpet to show that it was theres?? Maybe the training given by the Hairy Mob was too good and they now think that they are buns!!

Millie and the furry gang xxxx