15 years ago today, Dandy was very concerned about his future...

I'm terribly concerned, as I think that the sky is falling down.

As I'm writing this, I'm looking out of the window, and all of the clouds have come down, and are on our grass. I'm not too worried about the clouds as they are quite soft, but what about everything else that is up there?

The stars look like they might be sharp, so I would not want to be hit by one of those. The moon though just looks like a ball, so I suppose it might be a treat ball, and there may be things in it worth eating, we will just have to see. The thing that worries me most though is the sun. It is very hot and bright, so it might burn our grass.

As usual, Flopsy Girl is completely unfazed by all of this, she seems to think that things will all look after themselves, and that in a day or two at most, everything will be back to normal, I just wish I had her confidence.

On a brighter note, we still have a 2-foot in attendance all day, so we have started a new game. We hold on to our wee as long as we can, right up until the 2-foot cleans out our litter tray, then we let it all go and soak it again straight away. We played it again first thing this morning, just after we had our morning parsley. I really, really hope that we will all still be here to play the game tomorrow and that the sky stops falling.
Current Mood: worried worried
Current Music:Cat Stevens - Moonshadow 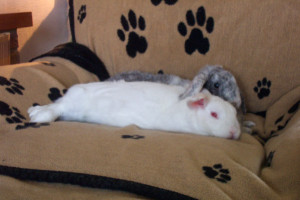 bramblespack
Apr. 28th, 2004 11:24 am (local)
Calm Down
We don't think the sky is falling Dandy. It seems to be fine here in York. Although its quite a horrible wet day.

dandybun
Apr. 28th, 2004 11:58 am (local)
Re: Calm Down
You are right, the clouds seem to have gone back up again... I wonder if they bounce? Anyway, it's still dismal here too in Wetherby, but at least I feel a bit more safe... What are you laughing at Flopsy Girl, WHO ARE YOU CALLING A WIMP!!!

Apr. 28th, 2004 02:08 pm (local)
Oh Dandy, I really do not mean to scare you but ... well ... our 2foot watches a lot of people that seem to live in a black plastic thing which is placed into the box that lights up. Erm, I think the plastic thing is called a video, anyhow our 2foot watched a video and it was about fog, we understand this is what 2foots call it when the clouds are on the ground. Anyhow this fog had some nasty 2foots which seemed to hurt other 2foots.

We never go outside when fog is down.

thehairymob
Apr. 28th, 2004 03:33 pm (local)
Fog
We watched that film the other night 'cos dad had it on the video box thing! There was a 2foot on something called a boat and he looked out of the window on the boat and said "There ain't no fog bank out there". There was a fog bank and a nasty 2foot got them!!!! We all hid behind Jemima 'cos she was on the couch! It was scary! But Scoot just laughed - he's an idiot!
Love from The Hairy Mob

thehairymob
Apr. 28th, 2004 03:56 pm (local)
Dandy being scared
Flopsy Girl - your Dandy is acting like a big Wuss! Fancy being scared of the sky - well, alright, I would be worried if it looked like it was going to fall on me but I know that it can't. Anyway, I would be brave and fight it 'cos I wouldn't let it hurt my Jinxy.
Love from Oscar (the brave)