Thank You
Apr. 30th, 2004 at 7:09 AM
Arwen and Fizz
I just wanted to thank everybun for their kind comments about the pictures I decided to share with you. Most of them were very welcome, although some were stupid (like uncle Larry's), and some showed just how jealous some bun's can get of my great looks (like Melster), still, I suppose this was only to be expected. I will try to put some new pictures up very soon, and I'll let you know when I do.

I don't know how many of you know this, but I have a new friend called Magic. He is a member of the Furry Gang, and he lives with my old friend Biccy. Magic has been very ill for the last two days, he has got the same thing wrong with him as I had a few days ago, so I know just how bad he feels. I Just wanted to let him know that both me and Flopsy Girl have got our paws crossed for him to get well very soon. 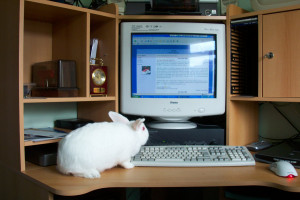 Anyway Dandy, Logenberry doesn't think your the best bun in the world she thinks teasle is. Hes an Opal Neddy Buck. Bramble also thinks that Hawthorns nicer. But they both agree that if you offered they wouldn't say no.

thehairymob
Apr. 30th, 2004 11:53 pm (local)
Magic
We all hope that Magic gets better soon - it makes us worry when we hear of one of our friends feeling poorly - get better soon Magic.
Love from The Hairy Mob

Dandy Bun,
I hate to disagree with you, but I think that winsome lass playing music on the stringed box (in the photos of your pets)is even more beautiful than Flopsy.
Uncle Larry"

Now as you all know, It's the buck 2-foot dressed up in a stupid outfit that makes the horrible noise on the wooden box, so I think Uncle Larry is a dirty old pervert.