15 years ago today, Dandy was looking forward to receiving a new toy...


Off Again
May. 16th, 2004 at 9:33 AM
Arwen and Fizz
Well the 2-foots are off again this morning, they are going to a place called Manchester to visit an open day at a bun sanctuary. This is good news, as there are bound to be things there that they can buy for us, so I'm expecting LOTS of stuff when they come home... Let's put it like this... THERE HAD DAMN WELL BETTER BE!!!
Current Mood: excited 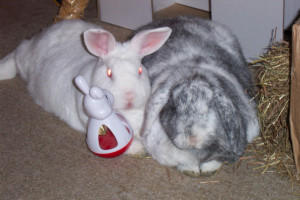 thehairymob
May. 16th, 2004 03:18 pm (local)
What, out again????
Now see here Dandy - you are going to have to put your foot down with a firm paw! You can't be letting those 2foots of yours keep going out - it is wonderful weather and the garden calls - never mind them going here, there and everywhere whenever they feel like it!
By the way, did you get any new toys and treats?
Well, off to the garden again now - there are other buns out and I have to go give them the once over ;-)
Love from Mr Jingles and the rest of the Hairy Mob

honeythebunny
May. 17th, 2004 02:07 am (local)
shake n chew
Oh wow, I have one of these, I usually just cover it in sawdust and hide it for my two foot to uncover when she cleans out my hutch. I wish my two foot could have gone to Manchester today like she wanted to but that damned diss-ur-tate-shon stopped her, bless her she was in tears about not going. Although I reminded her how she has the bunny day in 20th june

dandybun
May. 17th, 2004 07:00 am (local)
Re: shake n chew
Well the 20th is the most important, as that is when the Hairy Mob are going to train all of the 2-foots that go so that they will know how to look after us all better. Don't forget to write a letter for the hairy mob to say that your 2-foot has permission to attend the day.