15 years ago today, Dandy was writing about how cultured Flopsy Girl was becoming...

In her quest to become the most cultured bun in the world, Flopsy Girl has taken to watching the light up box. There is a stick thing that the 2-foots leave lying around, and if you press one of the buttons on it, the light up box comes on...

Anyway, Flopsy Girl was watching the light up box most of yesterday, and after exhausting research, she has confirmed that the most highbrow things that are on there are called "game shows". She says that "game shows" are great, because it shows the 2-foots in their true light, i.e. being greedy and making fools of each other. She said that it was all very educational, but when I asked her t tell me more about it she just said "You are the weakest link - goodbye".

Flopsy Girl is obviously now becoming very knowledgeable. I think that now would be a good time for anybun who has any questions for her problem page to ask her soon, before she gets so cultured that her answers become so deep and meaningful that nobun will be able to understand them!
Current Mood: uncomfortable 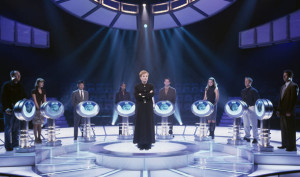 thehairymob
May. 20th, 2004 11:29 am (local)
Knowledgeable
Well done Flopsy for wanting to become so educated and cultured. If you want to become as wise and cultured as me then you should watch and listen to the cricket rather than game shows. These game shows can put you into a state of apathy as they become very tedious and boring to watch - cricket on the other hand is very cultured and extremely "Old English" - far, far better than that game called Football - full of louts and hooligans and rowdy people - some of them do tend to get in to the cricket matches when the football season has finished and this is unfortunate, but on the whole, cricket is a very cultured game indeed. Listen to Blowers on the radio - such a wonderful use of language and his descriptions of the scenery around him make the pictures come to life.
Take my advice Flopsy girl, and you never know, it may even instill some gentlemanly ways into Dandy!
Love from your friend Violet

dandybun
May. 20th, 2004 11:59 am (local)
Cricket
Good advice indeed Violet, I am listening to test match special as I type. You can listen to it on the net at http://www.bbc.co.uk/radio/aod/fivesportsextra_asx.shtml?9all
which is what I am doing

thehairymob
May. 20th, 2004 02:29 pm (local)
Re: Cricket
Dear Flopsy - thank you so much for the link - I have had it on while I have been catching up on my advanced computer course and it has been wonderful to listen to and learn at the same time.
Only one thing bothers me - does your radio keep going off and then you have to start it all over again?
Love from Violet