15 years ago today, Dandy was considering rehoming one of his pet 2-foots...

One of the 2-foots (the one with no fur on the top of his head) went out last night, and did not come home until about midnight. The other one was fussing around me, just because my tummy was gurgling a bit. I tried to show her that there was nothing wrong with me, but as she is just as stupid as the other one she took no notice...

Anyway, when the first one (the one with no fur on the to of his head) came home, he told her to stop worrying and went to bed, but she took no notice and stayed up all night with us, which is fine by me and Flopsy Girl, as we don't know why they have to go to bed anyway, but this morning she is really tired, so I can see that we are going to have to make lots of noise to keep her awake!.. I must say, I enjoyed all the fuss though!
Current Mood: cynical 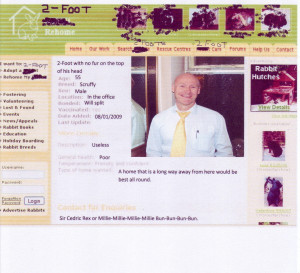 May. 26th, 2004 09:29 am (local)
Bad vibes!
I know what you mean Dandy, I used to have to put up with all sorts of intrusions and rather too much interest in my stomach and the contents of my litter tray. My 2foot even bought a stethoscope to listen to my tummy! Obsessed or what! Or maybe it was just an excuse to imitate the glamorous doctors from those hospital dramas on the light up box!

It's fine for them to stay up with us all night but could they PLEASE drop the anxious, negative attitude as they are giving us bad vibes man!

thehairymob
May. 26th, 2004 08:00 pm (local)
Jolly good show
This shows that your 2foot with the fur on top of her head is a very well trained 2foot indeed. You have done a very good job with her so far and she should be easy to train the rest of the way :-) Well done you two :-)
As for the 2foot with no fur on his head - what a disappointment he is to you two! With no thought but for himself he goes out, comes in and tells the good 2foot off and then goes to bed! He will of course be getting the most thorough training that can be given by both Violet and Mr Jingles - we would not wish that to happen to anyone really but he really does deserve it!
Is your tummy alright now?
Love from The Hairy Mob

dandybun
May. 26th, 2004 08:02 pm (local)
Re: Jolly good show
I'm fine thanks, there was no problem at all really... We must come up with a way to train the other 2-foot soon though, or we will have to seriously think of getting rid of him.

thehairymob
May. 26th, 2004 10:09 pm (local)
Re: Jolly good show
I believe that there may be some kind of site that you could place your 2foot on to re-home him and at the same time find a much better one or even some spares :-)
I think it's something like 2footrehome.com - it's well worth a try and well worth a look :-)
Love from Violet and the rest of the Hairy Mob

dandybun
May. 27th, 2004 07:02 am (local)
Re: Jolly good show
I was thinking more along the lines of just taking him out and leaving him somewhere, but I can't even do that until I've found another one to take his place.

thehairymob
May. 27th, 2004 11:41 am (local)
Re: Jolly good show
Hello Dandy, Barley Bun here - now I agree with you that your 2foot with no fur on his head is not as good as he should be, far from it indeed, but there is a good 2foot inside trying to get out. Look at the evidence, he gets you treats and goes to the allotments to get you the nicest food and parsley, he plants things in the garden for you to eat during the summer months, he buys you toys and makes you houses out of large boxes. Think of it logically, you know that he is a good 2foot - take it from one who has had the experience of really bad 2foots - your 2foot was kind enough to come with me to my new home and have some training and is coming again in June. I for one would rather have the 2foot that you have than the awful ones that I had before - they even threw me out of my own house! But I am the lucky one 'cos now I have a lovely home with lots of brothers and sisters and I have four friends to cuddle up to all day and night :-)
Love from Barley Bun and the rest of the Hairy Mob

dandybun
May. 27th, 2004 12:05 pm (local)
Re: Jolly good show
Well.... I suppose you have a point... He DOES try... It's just that he's rubbish! Still I suppose it could be worse, I was abandoned once too, and I know that he would never do that, so I MIGHT persevere with the training just a little bit longer.