15 years ago today, Dandy was trying to keep cool...


Keeping cool
May. 27th, 2004 at 7:08 AM
Arwen and Fizz
As much as me and Flopsy Girl love the summer, sometimes it's a real problem keeping cool. Although we can go anywhere we want to in the house, we spend almost all of our time in the living room, it's got a nice soft floor, tables we can hide underneath, and also (most importantly) it's where all our food and toys are to be found.

We do though still have our condo out in the hall, although I'll usually only go there if I want a drink of water, and Flopsy Girl normally never seems to bother at all. Last night though, it was the coolest place in the house, so we both went in there for a few hours, in fact Flopsy Girl got so comfortable, she was still there this morning when our 2-foots finally managed to drag themselves out of bed this morning at 5-30 (honestly, they get later and later!!!)

It was funny to see the 2-foots, one of them (the one with the for on the top of her head)who always fears the worst, thought that there must be something wrong with Flopsy Girl so started bothering her. "Honestly Dandy" she said "There is no peace or privacy in this house", then she did a thump and nicked what was left of my parsley!

I wish that the 2-foots would just MIND THEIR OWN DAMN BUSINESS!.... (their business being of course to serve us 24 hours a day, but NOT TO INTERFERE).
Current Mood: grumpy 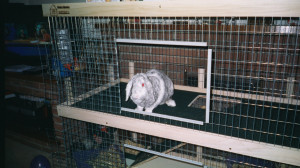 May. 27th, 2004 10:13 am (local)
Concerned
I am shocked to read that you are thinking of just dumping your 2foot somewhere and leaving him to fend for himself! :-o This irresponsible attitude to pet ownership is abominable.

I can certainly understand the temptation, we all know about his many shortcomings from reading your journal. But he may make an ideal pet for somebun less demanding and discerning. You really must give him the chance to be rehomed rather than just abandon him.

Obviously no 2foot could survive for long alone in the wild but your 2foot really is at the lowest end of the scale in intelligence and survival skills, and would definitely perish within hours!

We must take our responsibilities as pet owners seriously. If you do manage to rehome him think very carefully when choosing the replacement - look out for the qualities you current 2foot lacks, such as intelligence, good personality, quick to learn and with no serious behaviour problems.

dandybun
May. 27th, 2004 10:22 am (local)
Re: Concerned
So you think you have all the answers? Well the RSPCA won't take him, we don't have a local rescue centre, and nobun else here wants him, so what else am I supposed to do?

thehairymob
May. 27th, 2004 11:33 am (local)
Re: Concerned
To this we have to agree - his pictures do not do him any justice - believe us, we have met him in the flesh so to speak!
Love from The Hairy Mob

thehairymob
May. 27th, 2004 11:36 am (local)
Worrying
We have found that with our 2foot with the bumpy bits - she tends to worry over the slightest thing and gets pan-ik-ey - this of course is all due to good training and even though it may be annoying, we are lucky to have a good 2foot who does think of us all the time :-) As it should be of course!
Love from The Hairy Mob