15 years ago today, a new and lasting friendship began to develop...

I have some very good news. We all have a new journal to read. This Journal is written by Merry, and you can read it at http://www.livejournal.com/users/merridoe/

Merry lives in a place called Lawn Guyland which is in New York. Intensive research by Flopsy Girl would suggest that New York is not next to York where Brambles Pack live, apparently there is a big pond between them. Flopsy says that this pond is so big, it could be as much as 10 times bigger than the one in our garden CAN YOU IMAGINE THAT!

I hope that Merry writes in her journal regularly, and that she gets to know Bob (where is Bob these days by the way), The Haiy Mob, The Furry Gang, Honeybunny, and everybun else. I don't think that her 2-foot will be attending the training day on Sunday at Ebony Eyes though, as it's a bit late to make arrangements. I hope that you will all visit Merry's journal and say hello.
Current Mood: quixotic 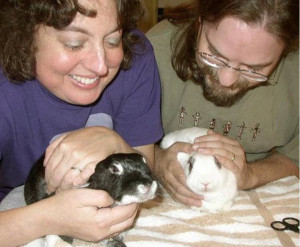