15 years ago today was a very historic occasion.

May it please all of my readers to learn that the Bunny-mint is now officially open for business. If I may first introduce the senior members of the house, starting with myself, the worlds most handsome, talented, and modest bun...

There are 3 things to vote on today:-
1. Flopsy Girl MUST share her bread-stick with Dandy (proposed by Dandy, opposed by Flopsy Girl)
2. Ban the hunting of useless greens such as iceberg lettuce (proposed by Poppy)
3. Ban foxes (proposed by Biccy)

We have a wonderful new Bunny-mint building that me and Flopsy Girl are still working very hard on to get just right. It has 2 floors, and a clock tower called BIG BUN.

Remember though, it is very important that if you want to vote on any of the 3 things that we are looking at, you must let us know today. Plus, if anybun else would like to join the Bunny-mint, we would love to hear from you.
Current Mood: accomplished 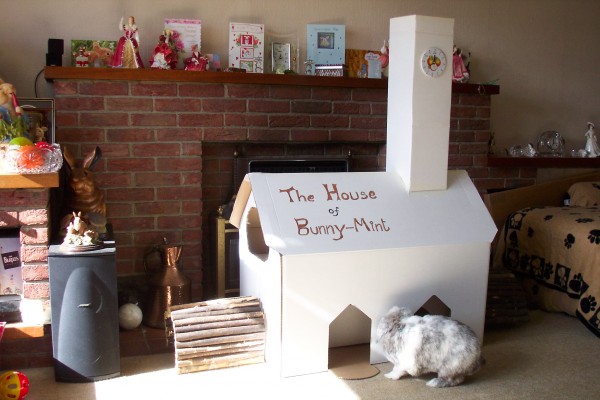 bramblespack
Sep. 20th, 2004 01:05 pm (local)
Votes
Two things plus our votes.
1) We proposed the ban on hunting any useless greens on the 15th September and not Poppy.

2) We would like to propose a wake in honour of Damson.

3) We vote in favour of the ban on hunting useless greens and the ban on foxes. However, Mayflower, Hop, Hazel and Birch vote against flopsy girl sharing her bread stick and everybun else is abstaining in case favoritism is shown...

Melster
Sep. 20th, 2004 05:10 pm (local)
1) I am in favour of this motion. Flopsy would be the first to complain if Dandy was not sharing and as we are setting up a fair and honest Bunny-mint our top ministers can't be seen to be having double standards!

2) I am also in favour of this motion. The 2-foots must save their energy for hunting greens we like. If they have energy left over they can use it to hunt other foods we like and give us nose rubs.

3) I have to abstain on this one as I am not fully aware of the issues. I would be concerned about where the foxes would go if there was a ban. Would they be killed? If so would we be overrun by foxes in spirit world? Perhaps we should relocate them or have some sort of law banning them from being within one mile of any bun.

Fine work for day one I think!

merridoe
Sep. 20th, 2004 08:36 pm (local)
Hi! Since my 2foots turned off the Pooter while they were away, I couldn't pop on and see what's happening on the other side of the Big Pond. Well, it sounds very busy! I'd like to vote yea for all three proposals, but I'm not sure if I qualify. You see, the Light Boxes here talk about PressIDents and CandyDates for that. I don't think we have a Pry-Minister here on the other side of the Big Pond. Of course, it's a mess here, too and the Buns should rule! It would make the world a much better place! Maybe I'll run for PressIDent!

3) Melster’s concern is very valid. We don’t want to over run by FOX either over in the rainbow bridge or down on earth. Even I am still fuzzy about what it is. I specialized in Meow and Woof only. It is a very difficult issue. As I am the most compassionated bun because I don’t want to see FOX die, but I don’t want any bun get hurt by Fox either. I will vote to ban FOX 1 mile within any bun as Melster's proposal.

After we vote, how do we enforce the result? What if Flopsy Girl still won’t share her bread stick? What if the stupid 2 foots just won’t learn and still collect useless green? What if FOX still come near bunnies? We need idea to enforce the decisions

Welcome Dawson to join us over the rainbow bridge!
Every bunny please takes care of your health. Live a full bunny life not until you are old and retired, then come over the bridge!

2) We are all agreed on banning the hunting of completely useless greens...they don't even taste good! What a waste of time.

3) We have never seen a foxes. So we're not sure if we want them banned. Mom watches a channel on the big glowing box that calles itself Fox. Is that the same? If it is, we vote yes, because the less time 2foots spend watchin the box, the more they can spend with us.

We're sorry we did not get our votes in sooner. Mom's been very selfish with her Pooter...playing something called Evar Quest all weekend. She pretends to be an elf with magic. Silly 2foot.

Oh, and we were thinking...

You have a Foreign minister (and much respect to Yoda for a great position), but has he considered establishing Em Bassys in other places? Mom says we are in the U-nited States, in Nuvaduh, and that is far from you. She says there is a big lake between us. She says that the 2foots have Em Bassys so that they can talk to each other. If you decided to have Em Bassys, we would like to volunteer for Head of the Nuvaduh Em Bassy.

Bunnybunny
Sep. 21st, 2004 02:30 am (local)
Proposal to enforce the voting result: If they don’t follow,
Bunnies will get mashed, 2 foots sent to pub
If FOX still come along,
Let bunnies thump and shout FOX (no s’where box needed).

Myself and the scruffy little one have been having a think about what we would like to do, is the home secretary position still available? If not maybe we could represent the channel islands?