15 years ago today, Dandy was attending to Bunny-Mint business.

1. From the Jersey Mob
No 2-foot should be allowed to hug us or to pick us up without permission.

2. From the Gower Bunn Gang
No 2-foot is to be allowed to go out unless they leave food for us first.

3. From Merridoe
No claw clipping is to be allowed as we need them for digging and destroying things

4. From Brambles Pack
As Hop now wears a red bandage, then Hop should be officially re-named "Santa's Little Helper"

5. From Mayflower
Each and every bun should be allowed a vote. So far it seems that each group of buns has been getting together and voting just once.

6. From Melster
Spirit buns should get 2 votes as they have lead two separate lives.

So as you can see there is a lot to think about. Just like last week, we will leave it a couple of days before we count up all the votes so that everybun gets a chance to have their say.
Current Mood: busy 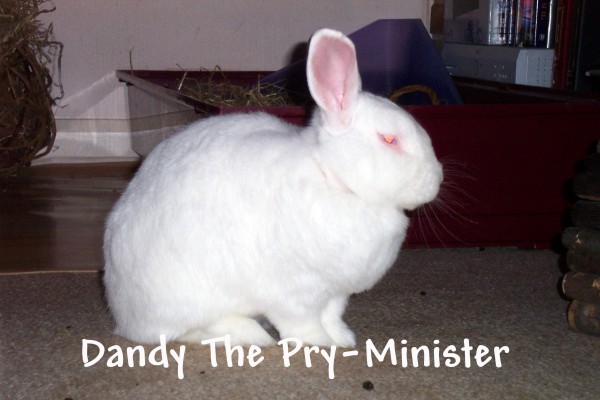 1) yes but then we proposed it!
2)Yes but we have to say that this has not happened to us yet
3) Yes
4) yes as santa is due soon.
5)Yes as although living in a group the buns might not all think the same things we all have our opinions
6)Yes

Who is the leader of the official Hop?

2. Definitely! This must be strictly enforced.

3. Definitely no claw clipping. If buns aren't doing enough digging or running so their claws are getting long and uncomfortable the Helf Minister will have to look into setting up some guy'd-lines to encourage exercise and activity in the warrens and condos.

4. I think Hop should be de-feeted on this (ha ha). I know Duchess had a different coloured bandage every week so what is to stop Hop changing from red to another colour, and then what will Santa do? No presents for us if he can't get enough help and having an 'awol' santa-helper with a blue bandage will make a laughing stock of Bunnymint and I will find it very hard to maintain order. So it has to be a definite NO to this one, and I urge every bun to vote the same!

5. I can't believe there was block voting and some buns had their views ignored! It's not a commune you know!! Yes, each bun must vote for themselves!

6. We this is very very good idea, someone very intelligent and knowledgeable must have suggested this (cough). Yes to spirit buns having 2 votes.

On that last point, I wonder if both votes would go the same way?! Because if it was already passed - on the one paw, when I was a living bun I would have said it's not fair on the living buns as most of the decisions in Bunnymint have more impact on the living buns . . . but on the other hand as a spirit bun I agree with it as we are more wise and knowledgeable . . . hmm. Food for thought!

Melster
Oct. 12th, 2004 09:00 pm (local)
Re: Recent comments
On the suggestion that each bun has a vote (or 2 votes) per foot. I'm not sure if this is being voted on this week or might be taken as an amendment. In my view it should be ignored . . . but just in case, I wish to point out that unless your feet are voting in different directions from each other the overall decisions will be unaffected - so all it does is make the vote counting harder and make extra work! It doesn't make any sense!
As for the comment that only spirit does should get 2 votes . . . frankly it is outrageous! Bucks must not be marginalised in this way, it's the thin end of the carrot! Next they will be extending this to include living bucks! Bucks do get things right and does would be lost without them. I should also highlight that the setting up of the wonderful Bunny-mint was the brainchild of a buck- and this is the thanks we get.

2) Yes from all for this as well

3) Definite yes as we all got our claws chopped today

4) All apart from Mayflower, Nettle and Hop as they think this is related to Hop they think Hop should have more votes on this issue.

5) Definite yes. If Merris amendment comes into force as well that gives us 64 votes.

6) NOfrom all. THe Spirit buns should create the Houses of Dominant bucks and Does and be allowed to stop proposals if they think they need amendment...

s to us we are doing okay and will post at some stage soon. BUt we have a few health issues at the moment.

Bramble
Oct. 12th, 2004 10:45 am (local)
Votes
I Bramble have decided that I should actually cast my votes from the spirit world.

Here they are then

1 - No as the occasional surprise hug is always welcomed

2 - Yes this is a very serious issue. It should also be noted that if food is left then No-Bun should scoff it all immediately.

5 - Yes as knowing the pack they are always confused about everything.

6 - No only spirit does should be allowed two votes as BUcks can't be trusted to do anything right. Although HAwthorns idea might work... Maybe it should be voted on next week.

Snuggles and Binkies to all

Bramble - Minster of something possibly defence - yeah Like I pay attention

Buddy - The Helf Minister
Oct. 12th, 2004 02:52 pm (local)
Votes
1 - Yes i think the 2 foots should be able to pick us up when they want. They feed us and care for us and make us better when we are sick, therefore why should they not be allowed a cuddle from their favourite bun when they are feeling a little bit down, under the weather or just need some TLC.
I appose issue 1

2 - I definitely agree with issue 2, ample food should be left for us if the 2 foots go out.

3 - I appose issue 3, i need my claws clipped on regular basis, as i have funny eyes at the moment and clipping my claws stops me scratching my eye and making it bleed.

4 - Agree in principal, but must raise the point about when Hop is no longer wearing it and has become used to the name, what happens then?

5 - I agree that everybunny should have a vote in Bunny mint, that is surely what it is for?

6 - Agreed, spirit buns should have 2 votes. No more though.

bramblespack
Oct. 13th, 2004 12:15 am (local)
Hop
Hop went to the VET today and got washed - Well we think she did as her bandage is now pink! We therefore propose an amendment that Hop be called 'Santas washed little Helper'